You may be tempted to stop reading. Please don’t.

Big fan of the Constitution. Largely supportive of the Founding Fathers (minus George’s predilection for using his slaves’ teeth to enhance his own wooden teeth). However, like many, I’m not sure they had assault weapons in mind when they wrote this and THIS is what it says:

A well regulated militia, being necessary to the security of a free state, the right of the people to keep and bear arms, shall not be infringed.

I can’t provide you with a photo of a man holding this because we don’t really have photos from that time (PS – “man” is not a sexist stereotype), but this was a typical “weapon” in the days of our Founding Fathers:

I can provide you with a photo of a man carrying one of today’s weapons (that is not as uncommon as one might think) because I used Google and found this image immediately: 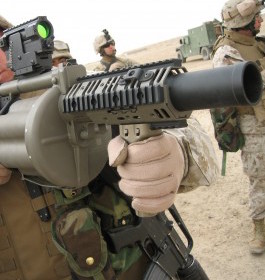 Given that Alexander Hamilton was killed with a rather unextraordinary dueling pistol, he would probably have a few choice words about the gravity of the decision to express one’s thoughts via a grenade launcher, regardless of the militaristic or non-militaristic grade or agenda. In addition, if the founding fathers had know one of their own would be shot in rather cold blood…might they have considered a somewhat stricter definition of “the right of the people to keep and bear arms”? Even Jefferson must have been saddened at this gun-related tragedy of his Federalist rival.

We are in a unique position as Americans. Today is July 22, 2015. The following facts are current US statistics. How did I get them? Sadly, we have a website offering us a grotesque picture of gun-related violence. Heroes offer this website, which is a desperate appeal to stop this deadly insanity: http://www.gunviolencearchive.org/

Let it soak in. Imagine sitting in the Pirate or Hello Kitty – themed room of your child after he or she has been killed. Imagine that happened because he or she was attending, for example, SCHOOL.

Ready for something else?

Every Sunday, I attend Mass in a fairly small community in Lucerne, Switzerland. I have noticed before, there is a store that sells “Waffen,” which means weapons. I know literally no one in Switzerland that has a bullet. I know men that have their service weapons (so did my grandfather), but no one that actually owns ammunition. No one and I know tons of Swissies.

On Tuesday, I was in Lucerne during a weekday and at my church to light a candle. When I walked past the Waffen storefront, I saw the display. 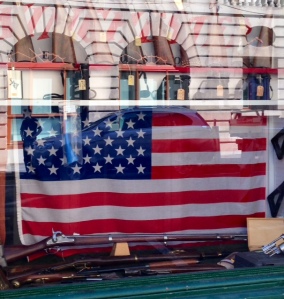 Let that also sink in.

As a nation, our flag has become synonymous with weapons. Not only here in a small corner of a rather small town in Europe. Also, in the Middle East. Also, in Africa. Everywhere. As Americans, our flag is not synonymous with peace (like the white cross flag flying in my eyesight right now) or Olympic glory or bravery. Our great nation, established by our beloved Founding Fathers, is now associated with unbridled violence.

It’s no secret why the Founding Fathers established their new home – religious freedom. You can like that or not, but it’s a well-documented fact. Good news if you don’t like it, you’ll love the hypocrisy coming next. The foundation of Christianity rests in these words:

Therefore all things whatsoever ye would that men should do to you, do ye even so to them: for this is the law and the prophets.

So, how would John Jay or Benjamin Franklin feel about the civilian purchase of a machine gun falling under the protection of the words they used to craft the 2nd?

Fellow Christians, do you find my reference to the Golden Rule in this context cliche or trite? Okay, what about James 4:12? Isaiah 33:22? What about that pesky commandment about not killing other people? Does your eye-for-an-eye because “Vengeance is mine” argument still hold fast? What about “blessed are the peacemakers”? Because, now, we are arming the actual peacemakers –  priests, educators, doctors. What would the singular member of the clergy who signed the Declaration of Independence, John Witherspoon, think of that?

What do we do? Support candidates that do not support the NRA (which is the very tyranny the Founding Fathers feared, by the way). Get behind anything Gaby Giffords is doing (here and here). Why? Because she was shot, but she is not arguing for an elimination of weapons. She is sensibly arguing for “safe and responsible gun ownership.” This public servant and former Congresswoman has a LOT of good ideas.

Stop buying or promoting gun-based video games and stop finding it normal to watch a movie that has guns in every scene. That’s not normal to anyone in any other country in the world.