At least 20 times a day, I am faced with the internal answer, “I don’t want to.” I usually ignore it. Why?

“I don’t want to” is a selfish answer. It is rarely, I’ve found, the right answer. Here’s my example.

Yesterday, I had the entire day planned from sun up to sun down. The crucial hour was the one between physical therapy and home. I needed to catch my train to get home to bake the birthday cake. I am in Switzerland. My train comes on time, two times an hour. Punkt.

After PT, I got on the tram. I put on my headphones and started my NYC streets focus. I would have 7 minutes to get my little orange train. This young guy kept making eye contact with me and it looked like he was trying to talk. “I don’t want to” was in my head and I kept listening to Van Morrison’s Plan B album.

But, the guy came over to me. I removed the earbud and trying to find out what he was saying even though I didn’t want to.

He was sick. Really sick. In fact, he almost passed out on me.

He was only trying to tell me that he needed some water.

I helped him off the tram and into a seat, fetched some water and crackers, and sat with him. He’d just had a long day, not enough water, and got dehydrated. It was simple.

I thought about it a lot this morning. My initial “I don’t want to” almost hindered me from doing exactly what I want to do with my life…help people in need of help. This is the rather quiet way I “Catholic Buddhist” in the world. I save the bible beating and “mean Messiah”-ing to others. I sort of do my own thing.

This morning, I also remembered Moni. She was just about to finish a triathlon last year when a man fell in front of her. Instead of listening to an “I don’t want to” because of exhaustion, self-determination, desire for a good time, etc., she stopped. When she realized he was very ill, she stayed with him. He died. Imagine if she had listened to all the reasons she “didn’t want to?” God bless my Moni. She’s one of my heroes.

I didn’t get the cake done because I didn’t make my train.

I made brownies instead. Is Martha Stewart going to give them a prize?…uh, no. But, we all ate them (not me, don’t like sweets) and had a great laugh. At a table full of good friends, everyone ate one of these “charming” brownies…even the people that probably “didn’t want to.” 😉 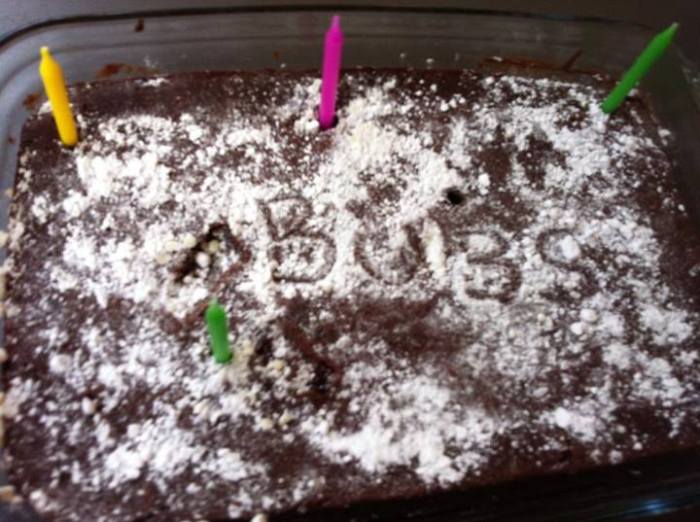